In the mid 1800’s this land was planted in Zinfandel, and was one of the earliest plantings of wine grapes in Sonoma Valley. A later planting of mixed black varieties (Durell clone Zinfandel, Palomino and Sylvaner) was on the land before the current 1990 planting.

The current vineyard is Cabernet Sauvignon (Kunde number 7 clone) grafted on 5-C rootstock. There is a cover crop of California native perennial grasses and scattered plantings of walnuts, persimmons and olives in addition to native fringe habitat surrounding the ranch. 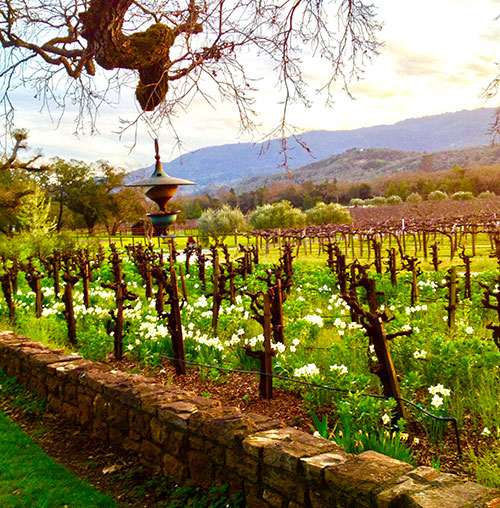 To insure the highest quality of wine made from our grapes and in order to sustain the soil, in 1994 we began a program aimed at diversifying both the above and below ground vineyard environment. We are practicing a style of vineyard management that integrates biological processes into the vineyards pest management and fertilization needs. We believe that encouraging diverse populations of plants and animals (polyculture) has advantages compared to herbicide, insecticide and clean cultivation (monoculture) practices. These advantages include biological insect and pathogen control, soil structure improvement and superior vine nutrition. Cultural practices that have reduced herbicide reliance and acted to prevent soil erosion, in addition to the use of fertilizing materials that feed both the vine and the soil, are central features of our program.

Selected cover crop plants were introduced into the vineyard and mechanical weed management was implemented in preference to herbicide application. Cover cropping, whether introduced species or resident vegetation, is a cornerstone of sustainable viticulture. Well-managed cover crops are source of biological diversification both below ground and on the soil surface. The habitat which cover crops provide for birds, insects and microorganisms encourages habitation and diversification of the grape vine canopy by these beneficial creatures. Cover crop plants also provide valuable forms of energy in the form of root (exudates and organic matter, from both roots and green tissue, which support diversified populations of soil borne plants and animals. Diversified populations of plants and animals help to make farming a sustainable endeavor…a system, which works with, and not against, the greatness of nature.

If cover crops are the cornerstone of sustainable viticulture, then the concept of feeding the soil is the foundation on which the cornerstone is laid. The balance of the major mineral fractions in soil (base saturation percentages) has a profound effect on the physical nature of soil (structure and tilth) as well as the chemical nature (available nutrients) of soil. Soil fertility is the result of the balance of soil minerals and the relative presence of humus. In order to have the most agronomically efficient and cost effective vineyard fertility, soil analysis is employed to determine the appropriate material, and rate of use, for feeding the soil. Fertilizing materials that are stable, broad spectrum and in complex forms are preferred choices where possible.

In addition, feeding the vine roots (fertigation) and feeding the vine green tissues (nutrient foliar spray) are employed, in addition to soil feeding, as a precision method of vine feeding. Tissue analysis and visual field inspections are employed to determine appropriate materials and rates of application of fertigation or foliar fertilizers. The nee for vine feeding is moderated by the practice of polyculture and soil feeding.

We believe the highest degree of wine duality is found from grapes with the greatest degree of vine and soil health. The Atwood Ranch Vineyard cultural practices are designed to develop optimum biological diversification and biological integration in order to preserve soil health and sustain quality vine growth.

The Atwood Ranch vineyard is located in Sonoma Valley on the east side of Calabazas Creek and to the north of State Highway 12, lying about 8.5 miles north of Sonoma, near Glen Ellen. The vineyard is in the Sonoma Creek watershed.

Sonoma Valley’s boundaries are formed by Sonoma Mountain along the west side and by Mount Veeder (Mayacamas range) on the east-The north end of the valley, where the vineyard lies, is called the Valley of the Moon.

The vineyard lies along the floor of Sonoma Valley and on the lower slopes of the ridges that bounds it .to the north. Elevations range between about 550 to’ 550 feet above sea level. Soil cover masks most of the bedrock and its details, but there are enough outcrops to give a rough picture of the-geologic situation.

Within several hundred feet of the surface, there are only two different geologic units that from younger to older are the Glen Ellen Formation and the Sonoma Volcanics. These units differ with respect to age, origin, rock types, thickness, lateral extent, structure, and water-bearing characteristics.

The Glen Ellen Formation is a group of moderately consolidated sediments of stream and, lake origin that formed from about one to three million years ago. The sediments comprise gravel, sand, clay and some volcanic ash. This unit underlies the southwest portion of the property, and is of greater thickness to the southwest.

Underlying the Glen Ellen Formation is the Tertiary-age Sonoma Volcanics, which is a group of lava flows, beds of tuff (volcanic ash), and some sediments that formed on an old land surface from about three to ten million years, ago. This unit covers much of eastern Sonoma and western Napa counties. Its thickness under the vineyard could be several hundred feet. Both formations have been folded and faulted to at least some extent.

Soils that have profiles almost alike makeup a soil series. Except for the different texture in the surface layer, all the soils of one series have major horizons that are similar in thickness, arrangement, and other important characteristics.